Comparison: The Thief of Joy & Your Sanity 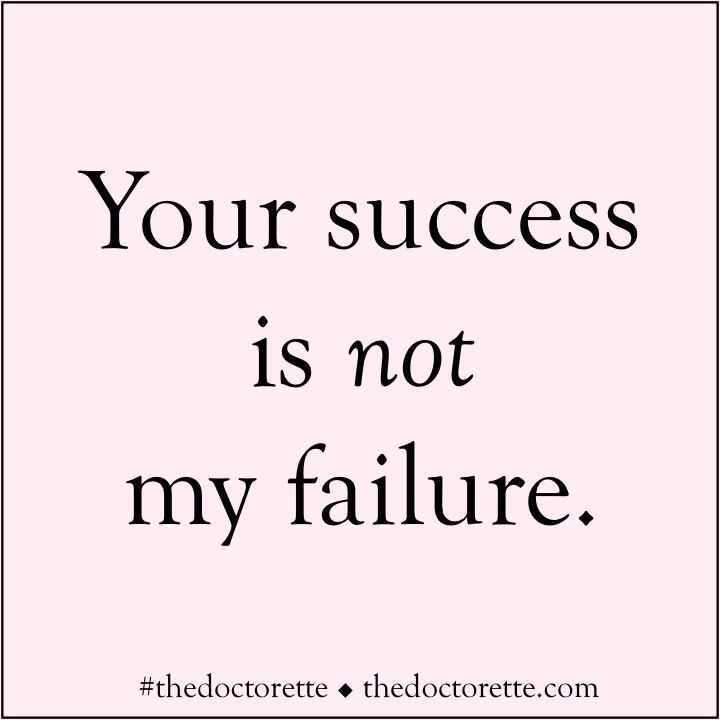 I took a course during my undergraduate in Social Psychology. I learned a lot of fascinating psychological and cognitive phenomena related to how we interact with each other, and the world around us. I enjoyed it so much that I almost chose social psychology for my doctorate studies (we all know how that ended up), and although my direction shifted, this is an area of psychological research that always gives me a little twinkle in my eye.

Everyone has heard the famous quote by Theodore Roosevelt…

“Comparison is the thief of joy.”

Or, perhaps, the old saying…

“The grass is always greener on the other side.”

The core of these famous sayings? Comparison. Social Comparison Theory, or how we define our value when compared to others, was one of the more interesting (and easily relatable) human behaviors that we studied. Social Comparison Theory was first developed by Leon Festinger in 1954, and was initially based on the idea that there is an innate human drive to gain accurate assessments of self (read his first published paper on this topic here). Festinger believed that people, when they weren’t capable of evaluating their own potential/worth/value, they would compare themselves to others.

It’s worth mentioning that there are two categories within Social Comparison Theory: (1) downward comparisons, & (2) upward comparisons. Upward comparisons are when we compare ourselves to others who we think are better than we are (more successful, more attractive, more intelligent). Downward comparisons are when we compare ourselves to others who we think aren’t as good as we are (less successful, less attractive, less intelligent). Downward social comparisons can help boost self-esteem (albeit, not in the healthiest way, not the most long-lasting). In 1981, Thomas Wills proposed that when individuals are low in subjective well-being, they often make downward social comparisons in an attempt to feel better, and he believed that they did this in both an active and passive way. Passive downward comparisons occur when a person takes their own condition into making the comparison (e.g., “I got a D on the test, but at least I didn’t fail like Nathan did). Active downward comparisons are more sinister. This is often carried out by demeaning others (e.g., “Oh my god, can you believe that Nicole failed that quiz? That was like, the easiest thing. She must be really freaking stupid.).

I’m here to tell you that comparing yourself to others is a natural, and dreadfully common act that we all engage in way too much that we care to acknowledge. Now, the thing is, we have the choice of whether we will use our comparison powers for good, or for evil. On the positive side, social comparison is a strategy that humans utilize when coping with threats, increasing resilience, and helping to establish a sense of identity. It can also be an amazing motivator. The negative side is it can demean others and ourselves. It can give us a false sense of self-esteem at the expense of others. By continually comparing ourselves to others, we neglect our originality, purpose, and unique contribution.

So, how does comparison manifest in academic environments? Well, sorry to be the bearer of bad news, but it’s everywhere. When a profession’s mantra is “publish or perish” you’re screwed in the social comparison department. It’s my belief that these comparisons are also more likely to occur in environments where the pressure to achieve is high, competition is steep, resources are scarce, and everyone has their own agenda. If you are nodding along with me, then you’ll agree that this description is characteristic of many different environments, academia included. Social comparison is an all too common occurrence in academic environments and something that I struggled with (and still do at times!) especially during the time I was completing my Ph.D. It was incredibly difficult when other students would seem to be excelling in areas I wasn’t, or receiving opportunities that weren’t offered to me. I would compare myself to them and say, why was I not give that opportunity? What’s wrong with me? Then I would find myself transitioning into finding aspects of myself that I perceived to be better and using that as a coping mechanism. It was a bad practice, and something that I ultimately grew out of. But, I still find myself comparing, even now as a new blogger.

Alright, now that we have accepted our infallibility, how do we work within this natural, human condition?

First, you need to appreciate yourself more. You need to recognize your own worth. You need to be confident in what you bring to the table.

Remember, that things happen in their own time for each of us. Just because something happened sooner for someone else doesn’t mean that it isn’t going to happen for you. It just hasn’t happened yet. Don’t attribute value to the passing of time.

Instead of bringing yourself down when someone else is succeeding, raise that person up. Practicing love for others, helps you practice self-love. Someone else’s success, is not your failure.

I’m going to go out on a limb here and quote a line from a modern day lyrical poet…Justin Bieber:

“The grass ain’t always greener on the other side. It’s green where you water it.”

Just because someone else appears to be succeeding in an area where we would like to be doing better, doesn’t mean that their life is better. We need to stop worrying about the grass growing at the house next door and start putting all that energy into our own growth.

Have you ever experienced this? Let’s chat about it! How did you overcome it? Comment below! Also, don’t forget to subscribe!